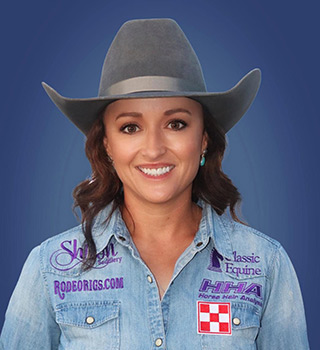 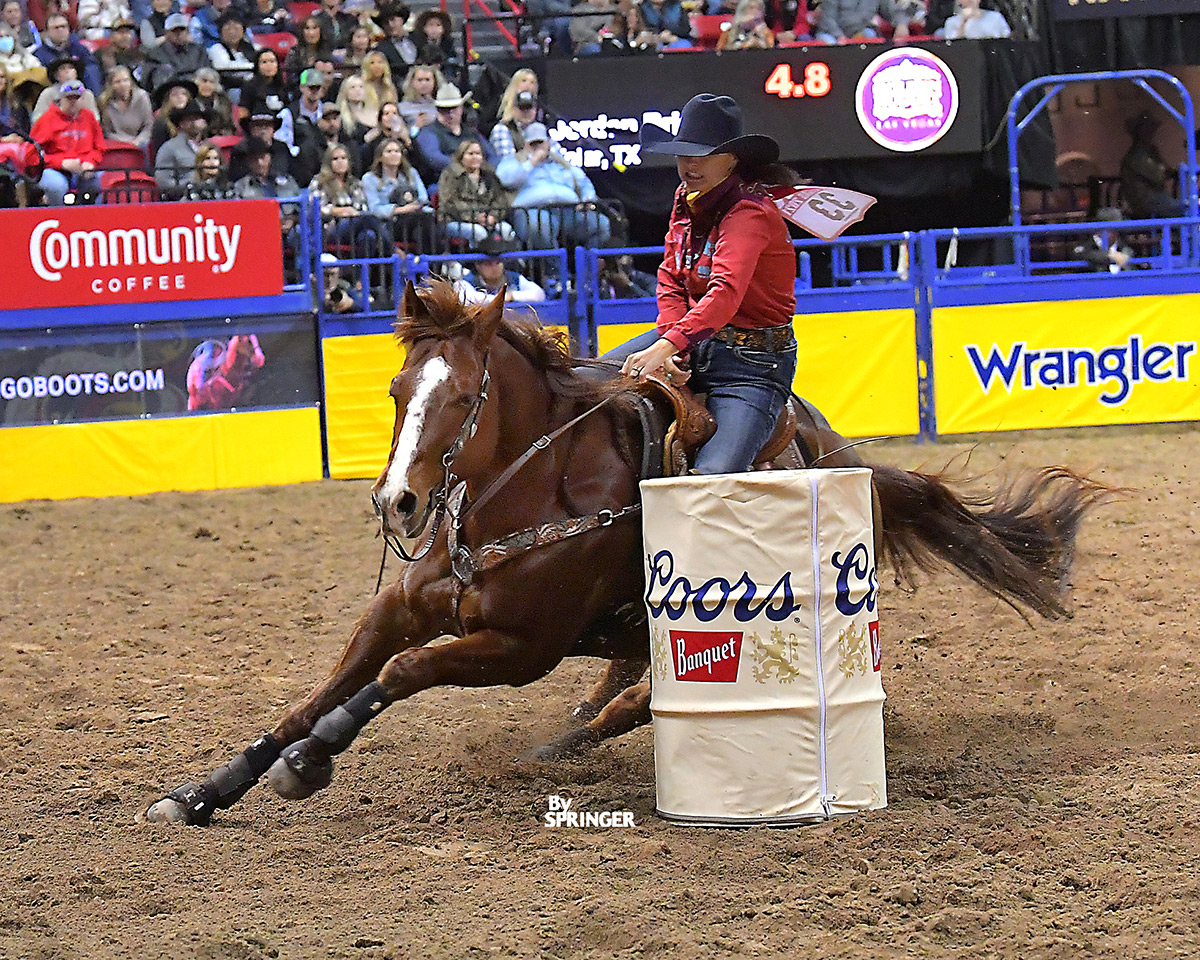 Briggs Takes Victory Lap in Eighth Round at the Wrangler NFR

LAS VEGAS, NEVADA – Jordon Briggs is the only barrel racer in the field of 15 that hasn’t hit a barrel through eight rounds in Las Vegas. Some might think she would safety up but that isn’t her plan.

Briggs and Rollo, the 2021 Barrel Horse of the Year captured the top spot in the eighth round in a time of 13.45 seconds.

“I just trust my horse so much,” noted Briggs, the daughter of ProRodeo Hall of Famer Kristie Peterson. “We just have to go at it every night. This is a really a tough group of ladies and I am the only one that hasn’t hit a barrel, so even if I do it won’t kill me. So you just keep going at the rounds and trust my horse and my training.” 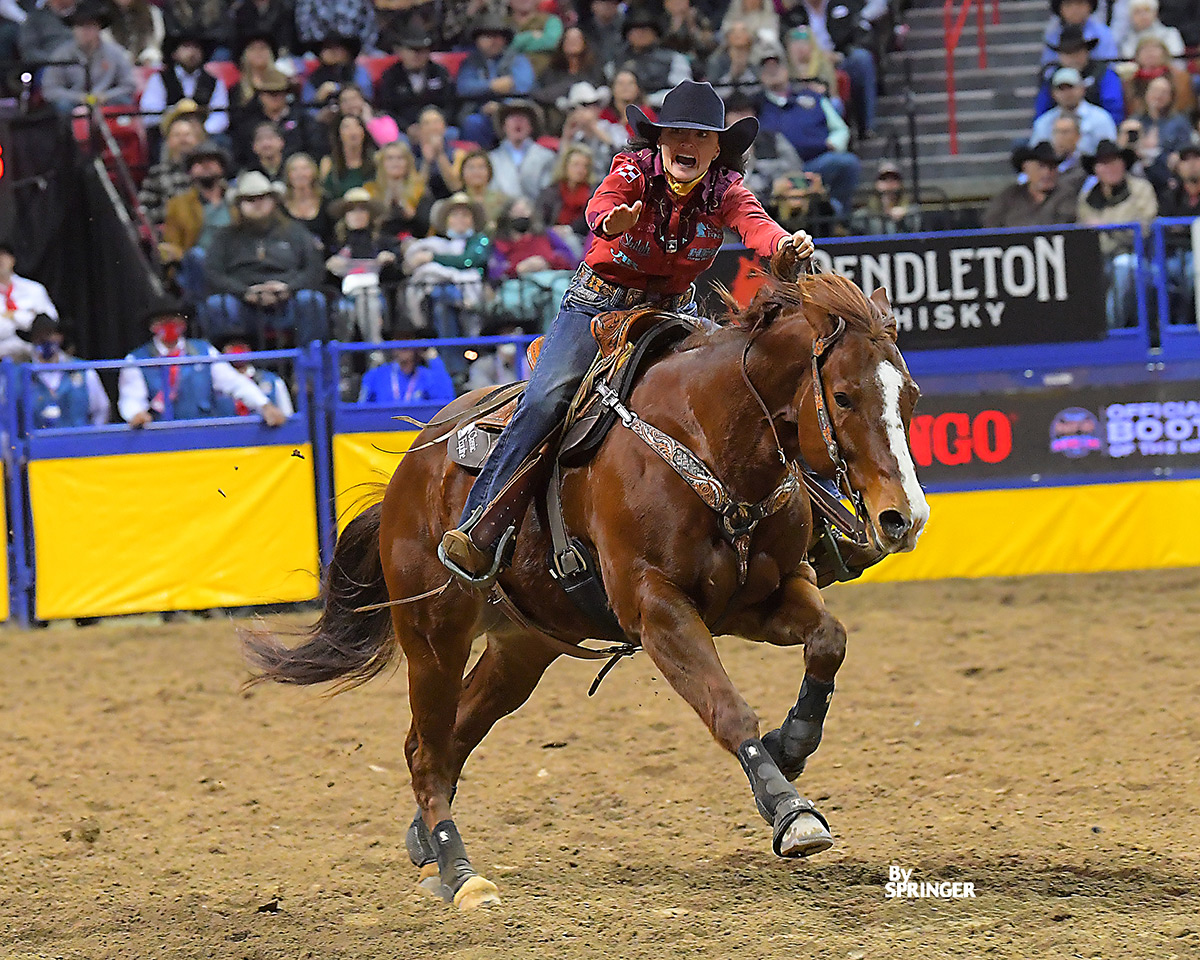 Briggs came in No. 2 behind Hailey Kinsel but winning the average is an important element for her shot at her first world title. So while she says they just have to go at it every night there is still a certain amount of pressure on her.

“Definitely pressure there,” stated Briggs. “You wouldn’t have a heart beat if you didn’t feel that pressure. I just keep trying to just be grateful that I am here and be grateful for what I have already accomplished. I just have to leave the rest up to whatever happens.”

Briggs is making her second Wrangler NFR appearance with her first coming in 2009. She had hoped Rollo would do well in this set-up but one never knows.

“I sure hoped he would be successful here,” noted Briggs. “He gave me no other indication to think any differently. I knew my horse could do it. I had to make sure my mental capability was strong enough to handle these 10 days. I am thankful for my support team which grew tonight with my mom (Kristie Peterson), my little girl and my sister all arriving into town. So this South Point party is going to be awesome tonight.”

A party indeed. Briggs leads the average with a total time of 109.63 with Kinsel second in 114.18 seconds. Briggs will be first out in the ninth round, while Kinsel will move to last on the ground. Fans don’t want to miss how things play out in the ninth round as it will go a long ways to determine if Kinsel wins her fourth in a row or Briggs captures her first. Briggs has placed in seven out of eight rounds with a first, second, third, two fifth place finishes and two sixth place finishes.

Ninth round action gets underway, Friday, December 9 at 5:45 p.m. PT LIVE on the Cowboy Channel.

Don’t forget to vote for the Jerry Ann Taylor Best Dressed Cowgirl as the ninth round will be your last chance to place your vote at https://wpra.com/index.php/nfr-2021-jerry-ann-taylor-awards-auto-schedule