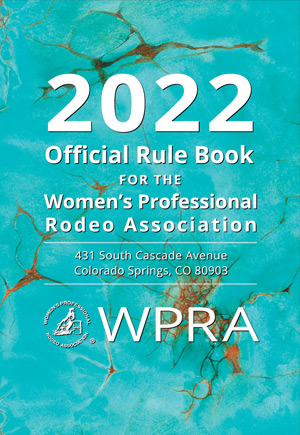 4/25/2022 – Due to system updates, the website results and standings will be delayed. We are working hard on getting these updated as soon as possible.

3/16/2022-COLORADO SPRINGS, COLORADO – During the most recent WPRA Board of Directors meeting, held via teleconference on March 8, 2022, both the Canadian Professional Rodeo Association (CPRA) agreement and the 2022 Calgary Stampede were approved.

In an effort to return to pre-pandemic business, these decisions will now give barrel racing and breakaway roping members of the WPRA opportunities to win money and have it count toward world standings on both sides of the Border. These decisions were not taken lightly given the current border requirements but the Board took into account many aspects that included but not limited to the member survey, member input at general membership meetings held in February, ability to provide opportunities for Canadian members to compete, the long standing relationship with both entities and the overall business impact for the Association as a whole both now and in the future.

In 2021, the WPRA expanded their long standing agreement with the Canadian Professional Rodeo Association (CPRA) to include women’s breakaway roping and a handful of events were approved with more planned for 2022. The CPRA agreement is a yearly agreement and the decision to approve or not approve for the 2022 season needed to take place prior to March 31, which is the member’s due date for the first Canadian rodeo and the start of the Maple Leaf Circuit season.

The motion was made and seconded to approve the CPRA agreement for another year for both barrel racing and breakaway roping and resulted in a 9-3 vote with two individuals absent from the call when the vote was taken.

The Board then tackled the elements surrounding the 2022 Calgary Stampede. The Calgary Stampede will feature just one female event, barrel racing, like in past years and this year will once again have the reduce prize money down from $100,000 in 2019 to $50,000 to the winner in 2022. Per direction of the WPRA Board, it was requested the Calgary Stampede use similar qualification guidelines as was done in 2019 and that only $25,000 of the $50,000 would count toward WPRA World Standings.

Other items discussed regarding the Calgary Stampede prior to voting included but not limited to the challenge of making a business decision from an Association standpoint as well as giving members a choice but also being mindful of the requirement of the vaccine to cross the border to compete. It was noted that Canadian members also have to get the vaccine to enter the United States to compete and that the PRCA would once again be approving the Calgary Stampede for 2022.
The Board of Directors voted via email later in the week, upon confirmation of the aforementioned requests made by the WPRA by the Calgary Stampede, to approve or not approve Calgary for 2022. The vote ended in a 8-5 vote to approve.

Therefore, for the 2022 rodeo season both CPRA approved rodeos and the Calgary Stampede earnings will count toward world standings for any WPRA member.

3/4/2022-WPRA Members,  Results from the WPRA Election have been tallied by the WPRA auditor. The election results are as follows:

2/24/2022-We are receiving notice that some members have yet to receive their physical ballots in the mail. Due to these mail issues the WPRA Board has voted to extend the deadline to return your ballot to the WPRA Auditor.

The new deadline to return your ballot to the WPRA Auditor is Thursday, March 3rd 5:00pm MT. The certification of election will follow on Friday, March 4th.

Please remember: If you have not received your physical WPRA ballot you can request a digital version by sending an email with your full name and WPRA number to ballot@wpra.com. If you receive a bounce email error message please call the WPRA office 719-447-4627 ext.6.

The new deadline to request a digital ballot is Thursday, March 3rd 10:00 am MT

This is a manual process and you will receive a response during normal business hours.

2/18/2022-The WPRA office will be closed Monday, February 21st for Presidents’ Day. You may still contact the office via email and fax and we will respond when the office reopens on Tuesday, February 22nd. Because of the holiday, rodeo payouts will be delayed.

2/16/2022-Election ballots were sent out to all eligible voting members last week and we are sensitive to the fact that USPS delivery times are variable.

Members must return their election ballot either by fax or mail to the WPRA auditor by 5:00pm MT on the 28th of February.

If you have not received your election ballot in the mail, you may request a digital version of your ballot by sending an email with your full name and WPRA membership number to ballot@wpra.com.

We strongly suggest members return their ballot to the WPRA Auditor by fax.

For more information on the WPRA election process, please reference chapter 3 in the 2022 WPRA Rule Book

Alert-Office Closed Due to Weather

2/2/2022-Due to weather the WPRA office is closed today. You may still contact the office by email and fax and we will respond when the office re-opens.

8/16/2021-Ashley, ND payout has been delayed due to missing information from the rodeo secretary.

7/13/2021-The payout will be delayed for the following rodeos due to missing timers sheets: Big Fork, MT Breakaway, Ringgold, GA, and Spooner, WI

6/15/2021-Cortez, CO payout has been delayed due to missing information from secretary.
You can find older articles on the previous WPRA.com website.
Click here to launch the archive site.