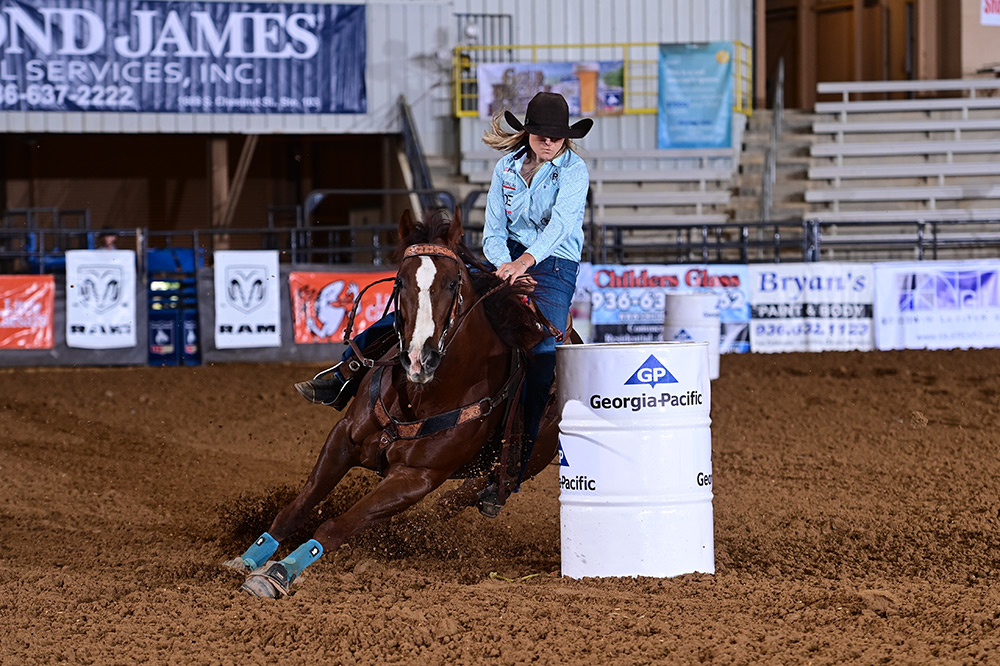 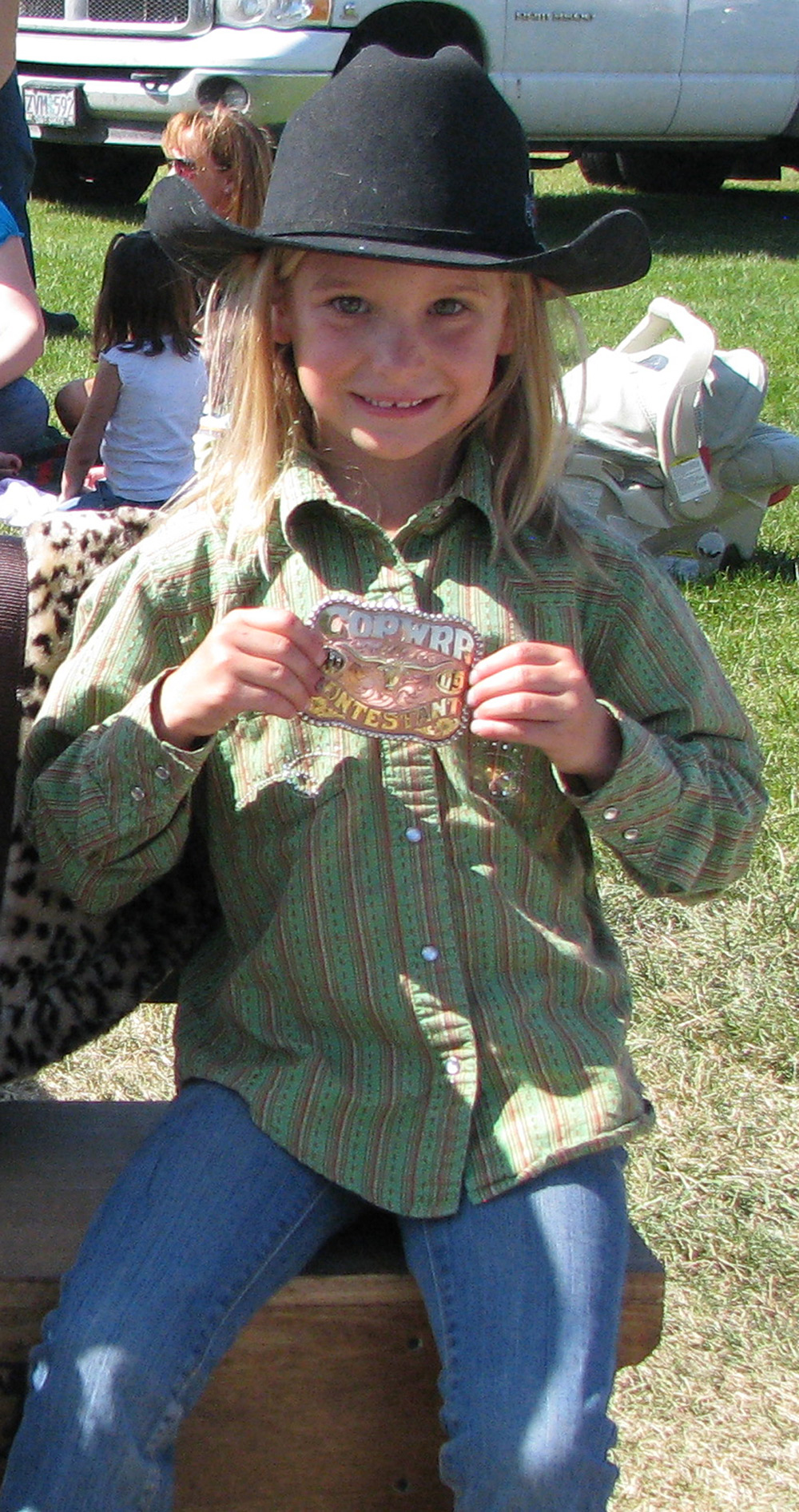 Laura Mote was so proud. Mote, then four years old, had completed her first solo barrel racing run at a rodeo in Arizona. She was aboard the family horse, Smoke the Wonder Pony.
“He was great,” said Mote.
Her joy increased when Mote heard “86” associated with her turn.
“That’s what dad gets,” she thought, already familiar with rodeo at a young age. “I’d take 86 all the time.”
There was just one problem.
The young Mote had not learned the difference between rough stock points and timed events measured in seconds.
“We had to tell her, ‘That’s not good. That’s slow,’ ” remembered her father, Bobby Mote, with soft chuckle.
Laura Mote is running barrels quite a bit faster these days.
The recent high school graduate earned her first WPRA victory, winning at Lufkin, Texas the third weekend of April.
And in the process, carving out a name for herself in a family rich in rodeo success.
Her father Bobby is a four-time world bareback champion and 15-time qualifier for the Wrangler Nationals Finals Rodeo. He was recently selected for the ProRodeo Hall of Fame class of 2022.
“We thought he should have gotten in sooner,” said Laura.
Bobby Mote, who retired from bareback riding in 2017, lives in Llano, Texas with his family, where he is the ranch manager for Reliance Ranches, a horse, cattle and hay operation.
Kate Mote, Laura’s mother, is also an accomplished horse trainer. Older brother Charlie is a realtor and body builder in Colorado while younger brother Trey just finished his freshman year of high school and participates in all sports. 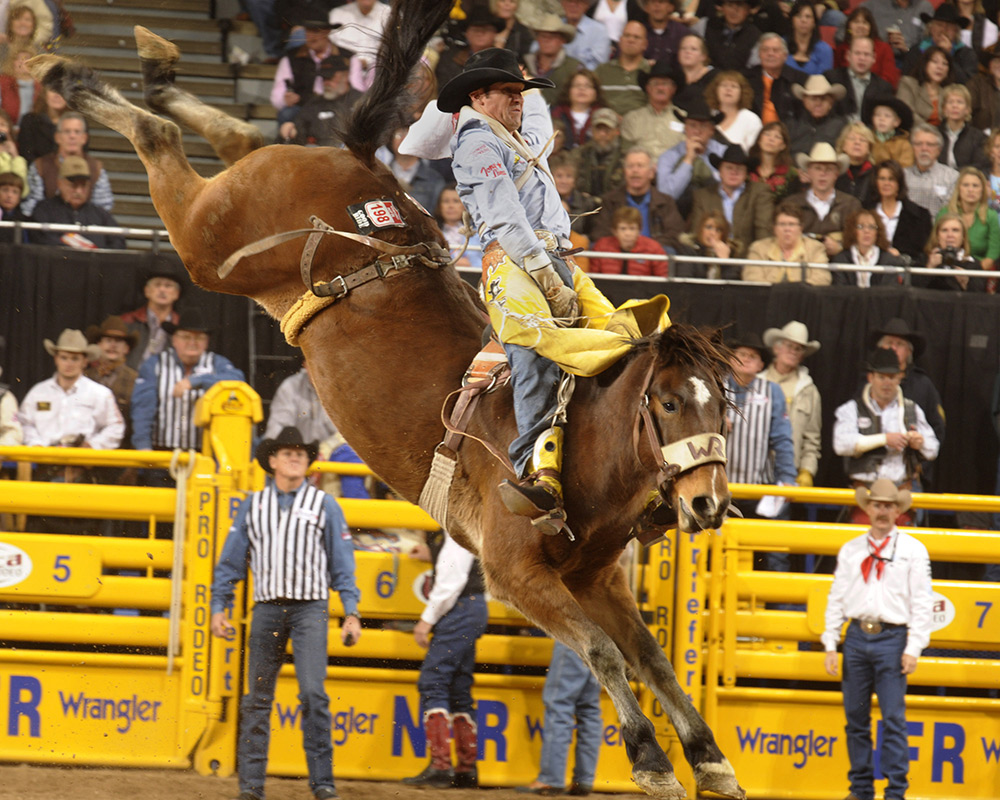 Bobby, Kate and Laura are also competitive team ropers.
Now it’s Laura who is carrying the family banner high into professional rodeo arenas.
“Super proud,” said Bobby, speaking for both parents. “She has been willing to put in the time and do the preparation.
“Since she was in diapers, Laura has been horse crazy. When she was a little girl, she would sneak away to the barn to be with the horses. You always had to keep an eye on her. Laura has been horse crazy since the day we let her start riding.”
The hard work and preparation paid off in Lufkin.
Aboard her horse Reb Hot Redbull, Mote won with a time of 14.49 seconds, one-hundredth of a second ahead of Gabbie Grothe, of Stephenville, Texas.
“When I do my job and Redbull does his, he is going to shine,” she said. “It gives you confidence you can do it together.
Mote earned $2,656 which moved her to seventh in the WPRA rookie standings. The win at Lufkin was more than a healthy check.
“I have fond memories of my dad riding there,” she said. “I was excited to go.”
Mote’s barrel racing success is certainly a family affair.
Bobby broke the horse, which is by Reb Hot Fame and out of Little Rock Misty.
“Just the way he moved,” said Bobby of what he liked. Before becoming a world champion bareback rider, Mote broke and trained horses for his parents, who ran a cutting horse operation in Oregon.
“We started him with team roping but he wanted to go. Kate took him and trained him,” noted Bobby.
Bobby, Kate and Laura are the only three to ride the horse. And that has not been easy at times.
“He’s a weirdo,” Bobby said with another chuckle. “He’s real quirky. It’s just his personality. He doesn’t do what you expect a horse to do.”
Laura first rode the nine-year-old dark sorrel in high school after her primary horse went down.
“I didn’t want to ride him. We had a prettier horse,” said Laura. “He looked like a baby dinosaur. His neck is so long and his hocks are so far to the ground.”
Two wins in two runs convinced Mote to stay in the saddle.
“Redbull is very enthusiastic in everything he does,” Laura continued. “He is real stud acting, dominant. He has a lot of character.”
He also wants his treats.
“When I saddle him, I have to give him a treat,” she said. “When I put the bridle in, treat. And he has to have one when he’s done. And his treats have to be on time.
“He loves doing what he does. He’s honest and consistent.”
When it comes to competing, Laura did not fall far from the family tree.
Bobby was known for his business-like approach before riding. Not much for chit-chat or visiting, he was there for a reason.
“I wasn’t caught up in visiting everybody. I think that got misinterpreted,” said Bobby. “I was there to win.”
His daughter is following the same boot prints.
“People probably think I’m not that friendly or approachable,” said Laura. “Dad taught me if you want to be a winner, you can’t think about much else.”
Bobby still offers advice but chooses his spots carefully.
“I’m too direct,” he said. “Kate is more into putting into words what she wants to do. The mental side of competing, I can help her with that the most. The focusing on the process. You can’t control a lot of things. Change what we can control. Focus on your job and the rest will take care of itself.
“I wait until she is ready to listen before I say anything.”
His daughter does listen.
“He has been a lot of help with the mental game,” said Laura. “He’s been through it. And he helps with the training, what rodeos are good. He teaches me how to handle the little slumps and helps you get out of them.”
“It’s mom’s horse. She has to listen to her,” added the father.
Laura’s earliest rodeo memories are traveling with the family to the Wrangler National Finals Rodeo and bigger rodeos like Houston and Calgary.
For a few years, the family traveled by motorhome until the Fourth of July run before returning home.
“I loved those times,” Laura said. “I had these roller skates, and I would skate on concrete and gravel. I would watch my dad ride, skate and come back and watch the barrel racing. I loved the barrel racing.”
Now she is creating her own professional rodeo memories. Traveling with her mother, Laura is planning a full schedule for 2022. She has committed to compete for Cisco College in the fall but that may change.
“We’ll see how the year goes,” Laura said.
Bobby offered some thoughts on her summer plans.
“I looked at her Fourth of July schedule and told her, ‘That would be hard for a guy with just a rigging bag and a car,’ ” he said.
The busy schedule has also brought about a role-reversal in the family. “I’m the one used to being gone,” said Bobby. “Now I have to hold down the home front.”
Laura sees some humor in the situation.
“Dad can’t cook,” she said with a laugh. “Trey can cook a little. They should be OK.”
And with every new rodeo, Laura carries the well-known family name.
“I used to be pressured by it,” admitted Laura. “People expected me to be perfect. It followed me from pee wee days. I learned how to feed off it. It’s kind of cool to be recognized.
“I told him, ‘One day, when you’re team roping, people are going to introduce you as Laura Mote’s dad.’ ” 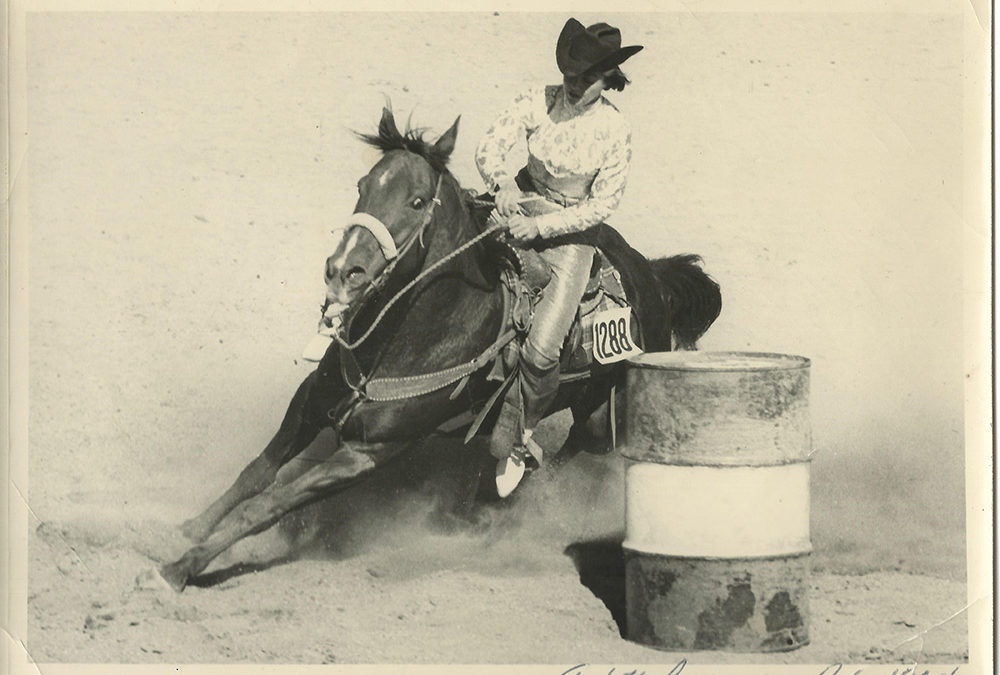 Ardith Bruce  Hall of Famer Ardith Bruce Passes Away By Ann Bleiker A larger than life personality, Ardith Bruce, lived life to the fullest and was tough as nails competing in barrel racing into her 80s. However, on Monday, June 27, 2022, she bid farewell to her... 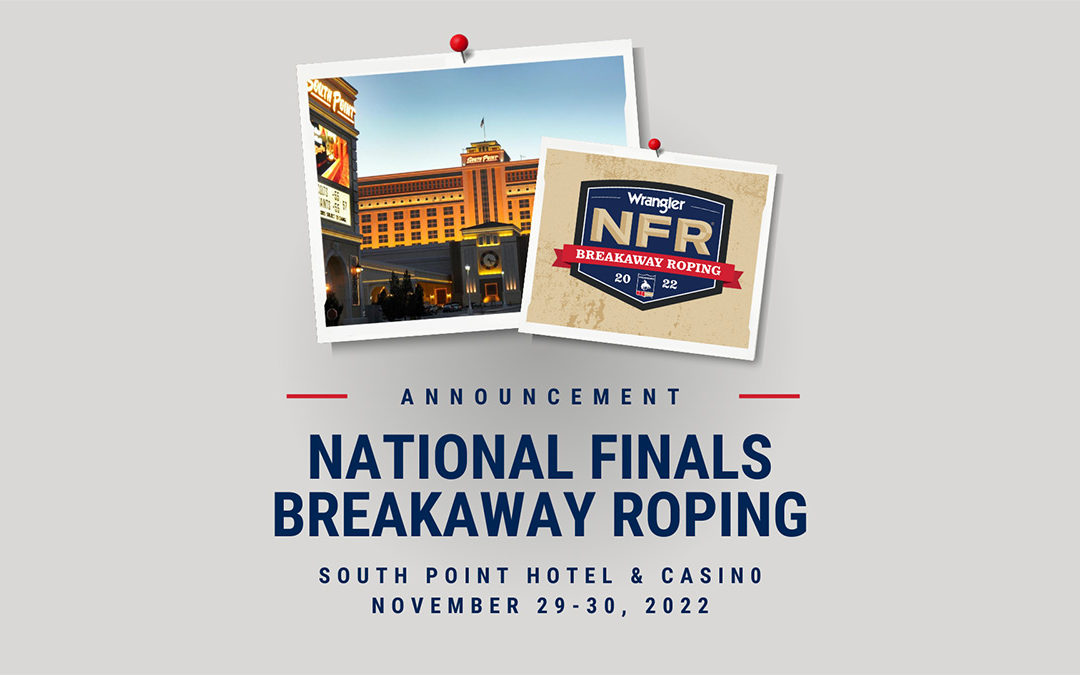 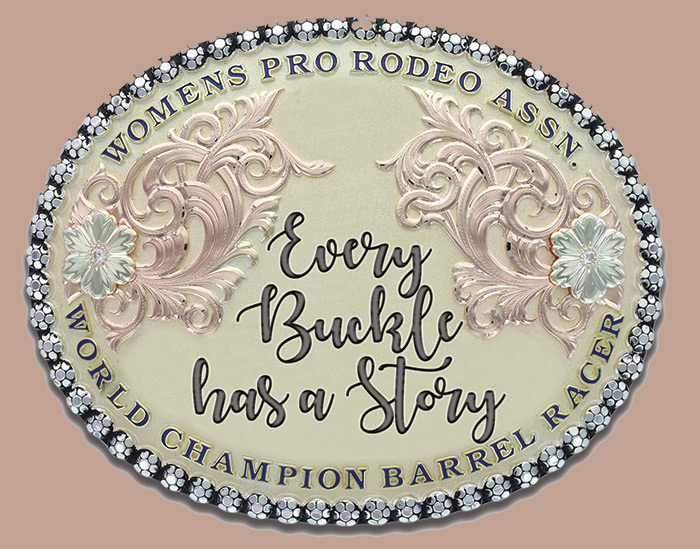 The Only Buckle I Wear

Jimmie MunroeThe Only Buckle I Wear Jimmie Munroe Photo by Kenneth Springer The buckle I cherish the most is the one that I received for winning the 1975 GRA/WPRA World Championship in barrel racing. I owe it all to the amazing equine partner that I rode to accomplish... 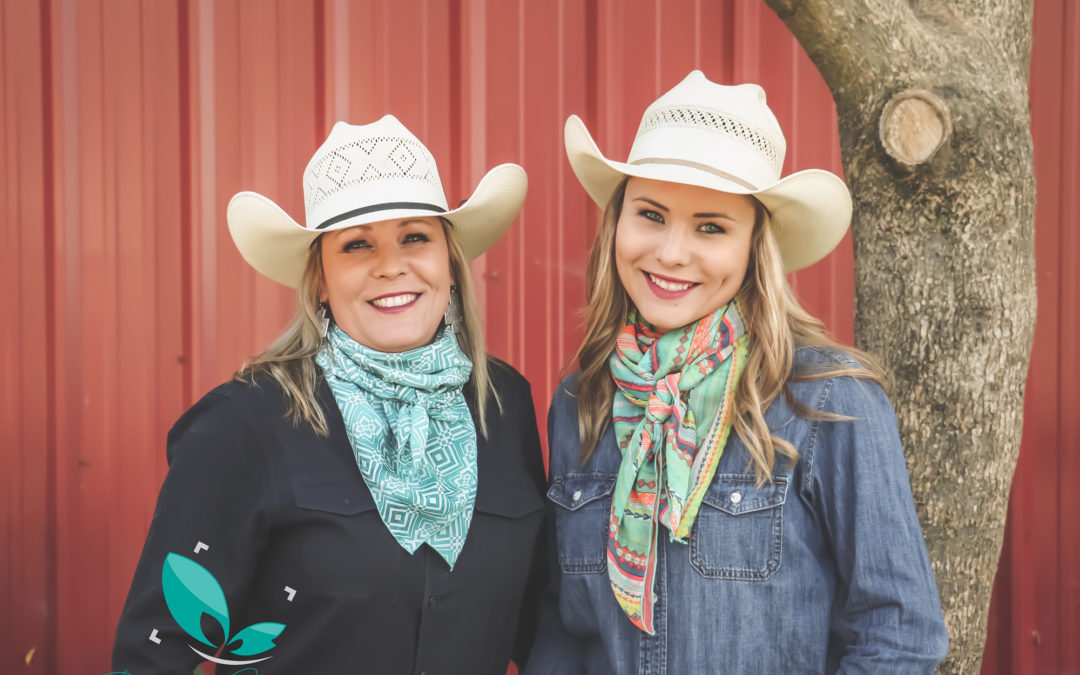 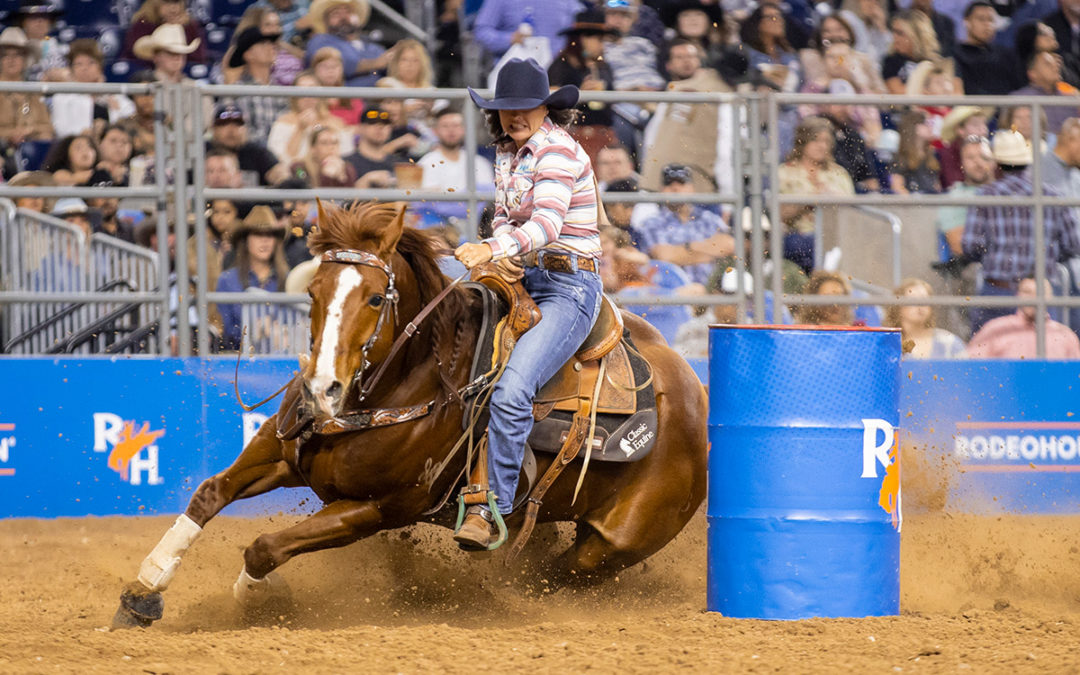 Jordon BriggsBriggs, Johnson Strike it Big in Houston By Ann Bleiker Photo courtesy RodeoHouston RodeoHouston is definitely a bucket list rodeo that every WPRA member would like to win and have on their resume. Before 2022, this dream was only achievable by barrel...