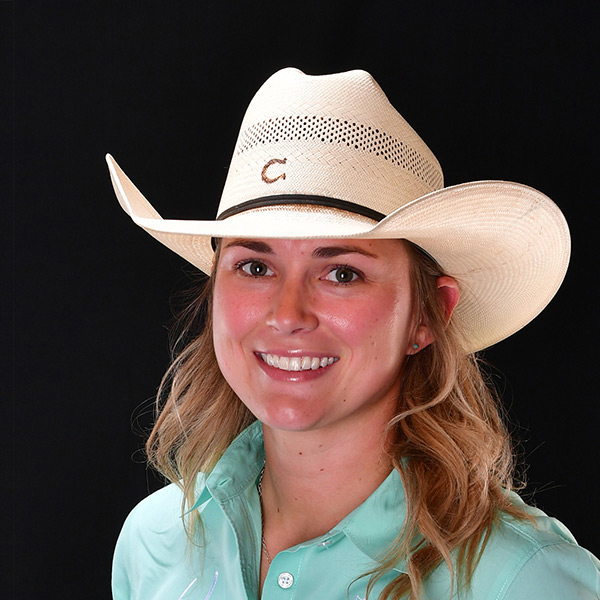 • Moved from 10th in the standings to sixth after winning $27,037, the most of any breakaway roper at the 2022 NFBR. Placed in 6 out of 10 rounds including winning the fourth round in a time of 2.0 seconds, and finished third in the average with a total time of 32.90 seconds on nine head.
• Won Range Days Rodeo (Rapid City, SD)
• Won Wolf Point (MT) Wild Horse Stampede
• Co-champion at Rancho Mission Viejo (San Juan Capistrano, CA)
• Co-champion at Missoula (MT) Stampede
• Finished second at Pendleton (OR) Round-Up
• Finished second at Cascade (MT) Pro Rodeo
• Finished second at White Sulphur Springs (MT) Springs Labor Day Rodeo

• 2021 – Entered first NFBR ranked 11th in the world and ended the year ranked 8th in the world with $48,295. Tied for the win in the second round with Kelsie Domer and Joey Williams in a time of 2.4 seconds and tied for the win in the ninth round with Martha Angelone in a time of 1.8 seconds. Finished fourth in the average in a total time of 42.3 on nine head. Finished ranked 11th in the WPRA co-approved breakaway standings with $17,131. Won most money among WPRA breakaway ropers over the Fourth of July known as Cowboy Christmas. Won an event best $14,330. Won the Black Hills Roundup (Belle Fourche, SD). Co-champion at Oakley (UT) Independence Day Rodeo. Finished second at Cody (WY) Stampede

Single… Native of Louisiana and second generation roper…Learned to rope from her dad Carl, who suffered a heart attack and passed away in July 2020…Bought Hawk from Colton Christian…Says she likes a smaller short strided horse and when Hawk gets in the corner of the box he doesn’t move. Said if they leave too early it is always her fault…Former collegiate softball player at Louisiana College…Traveling partner is Alex Loiselle, who has a real estate license and helping Cheyenne get one as well…Counts ProRodeo Hall of Famers Joe Beaver and Fred Whitfield as mentors…Dad’s biggest goals for her was for her to graduate college and be successful at roping – she accomplished both in 2021!