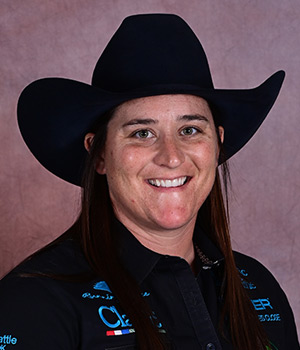 Career Earnings – through 2021 season in all events

• Entered first NFBR ranked 10th and finished the year ranked 4th. Tied for the win with Cheyanne Guillory and Joey Williams in the second round in a time of 2.4 seconds, tied with Sawyer Gilbert for the win in the sixth round in a time of 2.0 seconds and was eighth in the average in a total time of 16.3 on seven head.
• Won her ninth WPRA World title winning the all-around title. Finished second in the WPRA co-approved breakaway standings with $31,362, finished 15th in the team roping heading with $1,710, was third in the team roping heeling standings with $23,238 and was seventh in the tie-down roping with $616.
• Won the Sitting Bull Stampede (Mobridge, SD)
• Won Cord McCoy’s Pro Rodeo (Duncan, OK)
• Co-champion at the Golden Spike Rodeo (Tremonton, UT)
• Co-champion Old Fort Days (Fort Smith, AR)
• Finished second at the Ellensburg (WA) Rodeo
• Tied for second at the Ellis County Livestock Show and Rodeo (Waxahachie, TX)
• Currently ranked 2nd in the WPRA Breakaway (co-approved) standings with $27,123 going into WPRA World Finals in Waco, TX

Husband, Ryan Domer…Mother, Lisa and father, Tom; brother, Kelby (28) and Kade (20). Kelby is married to Kelsey and they have a daughter Korli. Kade rodeos at NWOSU…Born into a family of ropers and raised in Oklahoma. Moved to Texas to pursue roping career and lived with Jackie Crawford for many years…Central Plains Regional Breakaway Roping champion…