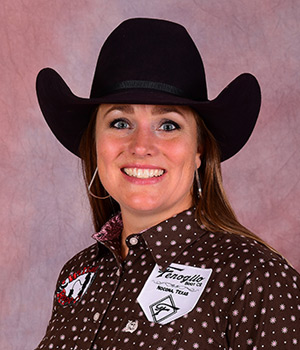 Single…Been competing in rodeos since she was 8 years old, with the exception of the years she was in pharmacy school…Parent’s are Kerry and Zanie Morrissey – father is a retired businessman (Work and Play Clothing Company in Merritt, B.C.) and mother is a retired school teacher; brother, Dan Morrissey and now runs the clothing store that their father started…After graduating from University of Wyoming with a Doctor of Pharmacy degree moved to Washington state where she worked for RiteAid Pharmacy until July of 2019 when she chose to take a break and pursue a full-time commitment to professional breakaway roping…Has had horse Oreo since he was 4 years old.