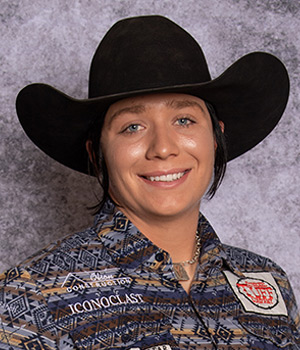 • Entered first NFBR ranked 2nd and won a total of $20,532 to win her first world title with $71,654 in earnings. Also was the only roper to rope all 10 and won the average in a total time of 46.3 seconds. Tied for the win in the sixth round with Kelsie Domer in a time of 2.0 seconds.
• Finished the year ranked 9th in the WPRA co-approved breakaway standings with $19,578
• Won Pendleton (OR) Round-Up.
• Won Cheyenne (WY) Frontier Days rodeo
• Finished second at ProRodeo Tour Finale (Salinas, CA)
• Co-champion at the Gem State Classic Pro Rodeo (Blackfoot, ID)
• Tied for second at the Atoka (OK) Pro Rodeo
• Tied for second at the Black Hills Roundup (Belle Fourche, SD)
• Finished third at the Buffalo Bill Rodeo (North Platte, NE)

Single…Parents, Lloyd and Patty; Brother, Grey…Mom grew up ranching and father competed in rodeo as a steer wrestler. Brother also involved in rodeo…Currently lives in Springtown, TX…Travels with Jordan Fabrizio. Jordan won Cheyenne breakaway roping in 2020 when it wasn’t sanctioned by WPRA in their first year to have the event so when Sawyer won in 2021, she proudly stated they were the only rig to ever win a breakaway roping title in Cheyenne…Her main horse Hollywood got hurt during first run in Cheyenne so she finished aboard her brother’s horse Big Enough…Family produces a breakaway roping once a year in Buffalo, SD…Has been roping since she was 6 and won the South Dakota Junior High Rodeo Breakaway in 2016 and went on to Nationals and won that as well. Won the state championship in breakaway her freshman and sophomore years…Sixth generation working on the family’s ranch in South Dakota.