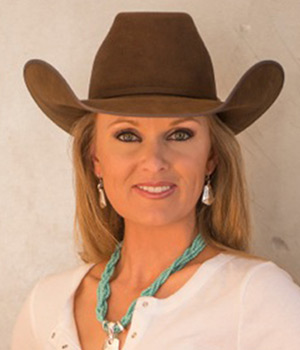 • 2020 – Finished the year ranked 12th with $90,569. Won $50,615 at her first NFR finishing eighth in the average in a total time of 184.92 seconds on 10 runs on a standard pattern and placed in three rounds. Won World’s Oldest Rodeo (Prescott, AZ) and Coleman (TX) PRCA Rodeo. Finished second at San Angelo (TX) Stock Show and Rodeo and at the Parker County Sheriff’s Posse Frontier Days (Weatherford, TX)

Husband, Tyson; two daughters…Works as a nurse practitioner in emergency department and in 2021, graduated with a Doctorate in Nursing Practice…Originally from Mesa, Arizona…Parents are Victor and Janiece Wilson; sister (Wylene Wilson Davis)- both competed in rodeo when they were young…Both Mac and Flash owned by Tres Mesa Horses (Mark & Lori Singleton) in Fort Worth. She became associated with Tres Mesa Horses when finishing her clinical rotations for school…Initially bought WPRA permit in 2004 while in college but saw the time commitment required and decided instead to focus on school and waited until 2018 to get permit filled…Plays the piano…Qualifying for The American and Mac and Flash in her trailer has really propelled her to new heights.