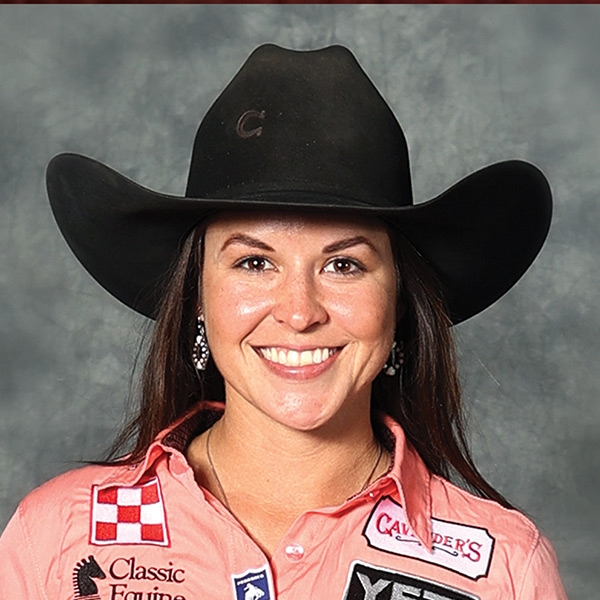 • 2019 – Entered the NFR ranked second and during the 10 days moved to the top of the leaderboard after winning $141,154 at the NFR with two round wins (Rd. 7 and 8) and placed in five other rounds. Became first WPRA barrel racer to win back-to-back titles since Kelly Kaminski in 2004-2005. Finished the year with $290,020. Won Sioux Falls (South Dakota) Premier Rodeo, Ogden (Utah) Pioneer Days Rodeo, Old Fort Days Rodeo (Fort Smith, Arkansas), San Antonio (Texas) Stock Show and Rodeo for second consecutive year and Fort Worth (Texas) Stock Show and Rodeo. Finished second at Hugo (Oklahoma) PRCA Rodeo and at the 50th Annual Cowboy Capital of the World PRCA Rodeo (Stephenville, Texas)

• 2018 – Entered the Wrangler NFR ranked No. 1 in the WPRA and won her first world title in Rd. 9 with earnings of $350,700 setting a new season earnings record. Won four rounds and placed in two other rounds en route to the title. Was 7th in the average; Won Calgary Stampede, the San Antonio Stock Show and Rodeo and set a new arena record, the Sanders County Fair & PRCA Rodeo (Plains, Mont.), the Fallon County Fair & Rodeo (Baker, Mont.), That Famous Preston (Idaho) Night Rodeo, Home of Champions Rodeo (Red Lodge, Mont.), Black Hills Roundup (Belle Fourche, S.D.), West of the Pecos (Texas) Rodeo and the Clovis (Calif.) Rodeo; finished second at RodeoHouston and second at the Fort Worth Stock Show and Rodeo
• 2017 – Moved from seventh in the world to reserve world champion after 10 days in Las Vegas with $288,092 in earnings. Set the new arena record at the NFR with a 13.11 during the third round. Set a new earnings record at the NFR after winning $189,385. Finished sixth in the average after placing in eight out of 10 rounds winning four of them; won a gold medal at the Days of ’47 Cowboy Games and Rodeo (Salt Lake City, Utah); Finished second at the Tri-State Fair and Rodeo (Amarillo, Texas), at the Dinosaur Days Rodeo (Vernal, Utah), at the Guymon (Okla.) Pioneer Days Rodeo and at the San Patricio County PRCA Rodeo (Sinton, Texas); Won West of the Pecos (Texas) Rodeo; tied for second at the National Western Stock Show and Rodeo (Denver, Colo.)
• 2016 – Won the Elizabeth (Colo.) Stampede, the Longview (Texas) PRCA Rodeo, the Crockett (Texas) Lions Club PRCA Rodeo and the Hugo (Okla.) PRCA Rodeo.
• 2015 – Finished ranked 19th in the WPRA Rookie of the Year standings with $4,880.

Single…Parents Dan and Leslie, brother Matt. Grew up on her family’s commercial beef cattle ranch in South Texas. Was a gymnast until age 11 and she decided to follow the rodeo world instead of the Olympic route…Her mother Leslie is a former Miss Rodeo Texas and enjoys starting colts, a passion that stemmed from working for horse trainers and something she now shares with Hailey…Is also a roper and competed at the 2017 WPRA World Finals..Competed on the Texas A&M University rodeo team…Purchased Sister from a sale in her 2-year old year and Hailey and her mom trained her…Kinsel’s WPRA season changed in July 2017 when she won $50,000 at the Days of ’47 Cowboy Games and Rodeo and set her on the path to the Wrangler NFR. She also won a share of $1 million when she won the barrel racing title at RFD-TVs the American in Dallas in February, 2017 and was second in 2018. Only contestant to win three Gold Medals at the Days of ’47 Cowboy Games & Rodeo in July in Salt Lake City….First WPRA member to win the world title, NFR average title, RAM Top Gun award and fast time award all in the same year (2020).