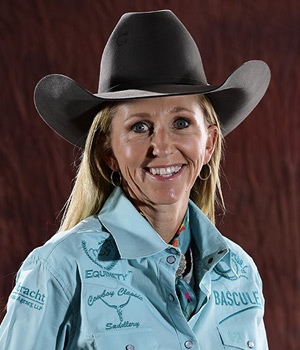 • 1997 – Qualified for her first NFR aboard her main mount April Hemp (April). Placed in seven out of 10 rounds.

• 1986 – Filled her permit at the New Mexico State Fair and Rodeo in Albuquerque at age 11 and then bought her rookie card for the 1987 season.

Single…Parents are M.L and Christi…She put barrel racing on the sideline following her NFR in 1998 and moved to Florida for four years serving as an insurance adjuster before moving back to Texas and investing her time in flipping houses to keep up her income. As a result, she got her real estate license in 2003 and CW Horse Properties was born in Texas in 2006. She keeps the business alive today. She specializes in farm and ranch but mainly horse properties. Her other business is Cowboy Classic Saddlery where she works alongside her parents, ML and Christi Wimberley. Together the family produces and ships out between 900 and 1100 saddles every year. Biggest portion of their business is trophy saddles…Her dad worked at the racetrack in El Paso, Texas, the same track Tuff Hedeman grew up around so Tuff became Cheyenne’s childhood brother since she was an only child…KN Fabs Mist of Fame is owned by Robin Weaver and a full sister to Ivy Conrado’s mount KN Fabs Gift of Fame “JLo.” Weaver also offered Wimberley VQ Sucker Punch to ride in 2019 as well…In addition to real estate and the saddle making company, Wimberley also trains futurity horses and after training and selling a full sibling to the mare Dash Ta Suz, the opportunity to own Dash Ta Suz came around with a good friend and fellow Wrangler NFR Lee Ann Guilkey, said the mare was too turn-y for her. Wimberley partnered with Steve Hulbert to buy the horse and the rest is history and now has the blonde cowgirl back at the Wrangler NFR after 21 years.