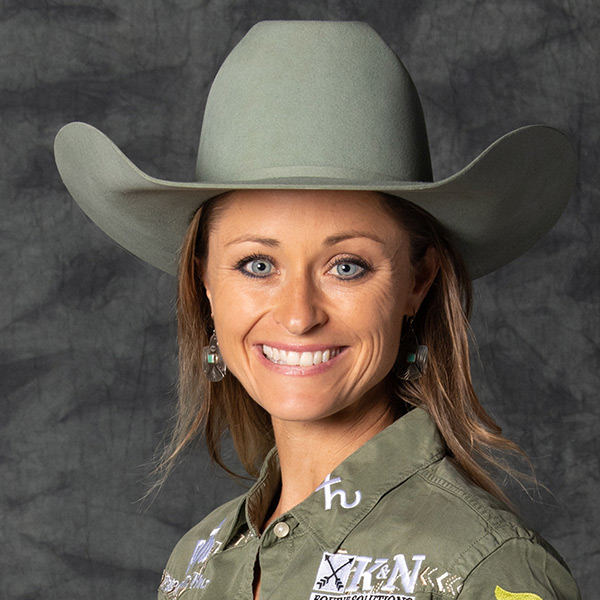 • 2021 – Entered the Wrangler NFR ranked 11th and finished the year ranked sixth. Crossed the $1 million mark in career earnings at the Wrangler NFR after wining $111,892. Placed in five out of 10 rounds, winning the third round in 13.70 seconds and tied with Jordon Briggs in the ninth in a time of 13.48. Finished tied for fourth in the average in a time of 146.83. Finished the year ranked 6th with $183,700. Co-champion at the Sheridan County Fair & Rodeo (Gordon, NE). Finished second at Magic Valley Stampede (Filer, ID), at the Sanders County Fair & PRCA Rodeo (Plains, MT), at Ellensburg (WA) Rodeo, at Laramie (WY) Jubilee Days and at Buffalo Bill Rodeo (North Platte, NE)

Husband, Ty…Stepfather, Dave Salzbrenner…Was named after Stevie Nicks. Grew up in Ordway, Colo., and looked up to barrel racers like Rachael Myllymaki…Family was not involved in rodeo but learned valuable lessons from her step-father about training horses including the importance of good foundation. Didn’t have the money to buy the good ones with good breeding so trained young horses…Serves as a radiologic technician, taking -x-rays, CT scans and working in surgery. ..Cuatro Fame is owned by Jason and Melissa Mouton of Scott, La., has had since end of 2014 when the Moutons sent him to her to sell. Mouton initially bought Cuatro as a 4-year old after she was diagnosed with Lupus. She wanted a project horse to occupy her time. Hillman asked if she could rodeo season him before selling and they all agreed. Then they decided to let Stevi try to make the NFR on him…In 2017, she rode Morning Traffic is owned by Cody and Michelle Darling and Sharpie who was owned by Matt and Bendi Dunn and out of Mulberry Canyon Moon, a mare that carried Angie Meadors to the Wrangler NFR in 2011…Favorite rodeo is Salinas because you can get fresh fruit and the ocean all in one; if she wasn’t a barrel racer she would probably be a pediatrician; actress that would play her in a movie is Reese Witherspoon because people say she looks like her…In 2020, won the non-sanctioned RFD-TV’s The American in Arlington, TX…Sponsored by Nutrena, 5-Star Pads, MVP, Shiloh Saddlery, Rock N Roll Cowgirl, Team PHT, Flair Strips, EquiPulmin, Outlaw Equine, Mouton Sand and Gravel, Dunn Ranch, Merhow Trailers, FlexiNeb, HayRite Alfalfa Cubes, PrepareToWin.tv…At 2021 Wrangler NFR plans to take Emma Charleston’s horse Makana that Emma bought from Michele McLeod and Baby Flash owned by the Dunns…In August of 2022, Stevi and the Dunn family lost Famous Lemon Drop “Lemon Drop” (6-old palomino mare), Sire: First Down French/Dam: A Famous Lady to complications from colic.